The white elephant lumbers on…

The announcement on 10 January 2012 that HS2 plans are to go ahead, with only minor route changes, is a great disappointment to the Cubbington Action Group Against HS2. Notable changes will be increased tunnel sections in the Chilterns and West London, at some considerable additional cost.

Peter Delow, Cubbington Action Group’s Chairman, gave his initial reaction: “We are amazed at how casually the Government has dismissed all the doubts about the details of the HS2 proposals that have been expressed by thousands of respondents to the public consultation, the many reports and articles from many think-tanks, organisations, journalists and the House of Commons Transport Select Committee. Unbelievably, the response by the Government seems to be, overall, that there were no faults in the original proposals. The Government has published a mountain of documentation in defence of its decision, and we will need time to assess it carefully. It has been obvious from before the launch of the public consultation that the Coalition Government intended to proceed with this scheme, come hell or high water.

“The Government has indicated that the primary reason for the decision is that HS2 is the best solution to enhancing the capacity and performance of our key North-South rail links. This conclusion is based upon a report that the Government commissioned from Network Rail – hardly an independent reviewer – to assess alternatives based upon upgrading the existing infrastructure, rather than building a new railway. This report was clearly commissioned with the implied brief that these alternatives should be dismissed.

“The fact that Network Rail’s work was done in such secrecy indicates, we feel, just how shabby and underhand the Government has been in its relentless efforts to push for HS2. Network Rail made no attempt, when comparing alternative proposals to HS2, to seek clarification from the rail experts who had formulated these proposals, being engaged to do so by 51M, the alliance of local authorities, which then submitted them as part of the response to the Public Consultation.

“Cubbington Action Group will be seeking a meeting with HS2 Ltd, as there has been a totally inadequate response to the major environmental impacts that HS2 will have around South Cubbington Wood. HS2 Ltd has reviewed only one of the three main issues identified in the Action Group’s submission to the Public Consultation: that of the devastation of South Cubbington Wood. The Action Group had proposed a bored tunnel under the wood, similar to the solution adopted for Long Itchington Wood SSSI. HS2 Ltd appears to have ignored this suggestion totally and is proposing ‘minimising the impacts’ by reducing the width, length and depth of the cutting and building a retaining wall, thus saving money for mitigation measures elsewhere. HS2 Ltd also ignored issues of damage to the Leam Valley, noise and visual pollution there and close to houses on the A445 and the loss of the National Champion Wild Pear tree.”

The Action Group’s submission to the Public consultation may be viewed online.

Cubbington Action Group Against HS2 intends to pursue a better solution for Cubbington whilst maintaining its fight against HS2, not only on behalf of local residents, but for all UK taxpayers.

The questionnaire in the HS2 consultation consisted of 7 questions. The table below gives the questions and the number of responses for and against. 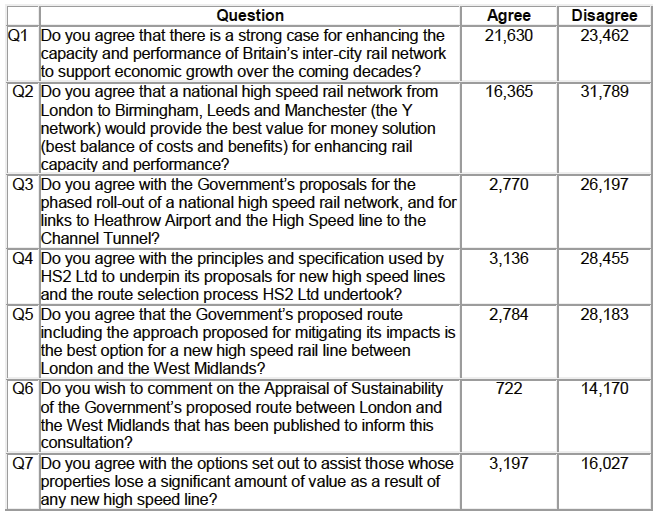 The total public vote represented 0.11% of the UK voting population of 42 million.

The same information is given below in chart form. 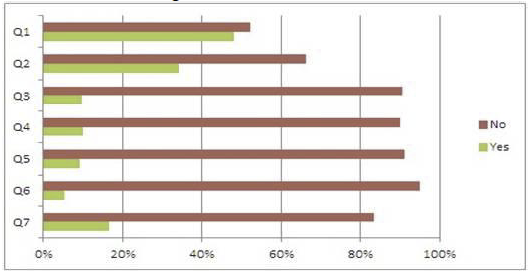