Since last Saturday, protestors have been occupying a site in the area of South Cubbington Wood which has been fenced off for felling by HS2 Ltd contractors Laing Murphy.  Despite the announcement by Secretary of State for Transport Grant Shapps of a reprieve for ancient woodlands until a decision on the future of HS2 at the end of the Oakervee review, it appears that sparing certain woodlands, including several in mid-Warwickshire,  from the chop would be an “absolute necessity to avoid delay and extra costs”.  Further delay, that is!

MP Jeremy Wright asked constituents to write to Mr Shapps via him, so that letters would stand at least a chance of being read by the Minister.  He agreed with HS2 Ltd that nothing should happen before October 1st and Jeremy would be given a list of the woods where felling was “absolutely necessary” and then a few days grace to approach Grant Shapps again.  This is what we heard at the Cubbington event on 21st September.

The Woodland Trust, however, were told last week that 9th October was the appointed day for felling.

Unwilling to trust HS2 Ltd, Matt Bishop and members of the Walk the Line – Stop HS2 group set up camp in the woods on a very rainy Saturday evening.  Photo below from their Facebook page, taken on relatively dry Sunday.. 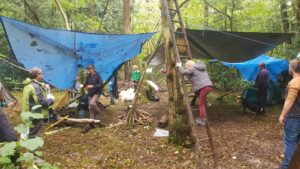 Other woods under immediate threat are Crackley and Roughknowles near Kenilworth.

At the moment, access is being allowed to the wood by LM, who have opened the barrier erected last week in the field at the top of Mill Lane.  Visitors are welcome, but wear your wellies!  Enter the wood in the corner of the field, follow the central path and then the red ribbons.