It’s been a very busy week in HS2 land and consequently at this computer!    This is the text of a press release just sent to the local media, and relevant photos.  It sets out the events of the past week from the drop-in session at Cubbington Village Hall on 10th September up to yesterday’s announcement.

“Last week, at an HS2 Ltd drop-in session in Cubbington, villagers were devastated to learn that the “extensive vegetation clearance” planned for October would include the felling of a central swathe of the ancient South Cubbington Wood and possibly the beautiful Cubbington Pear Tree. This despite the whole project being under review.
Two days later, notices went up informing walkers that the Avon Way footpath through the woods would be closed from this Thursday, September 19th until 23rd December. The next day, notice of closure of a permissive path along the south side of the wood was posted. 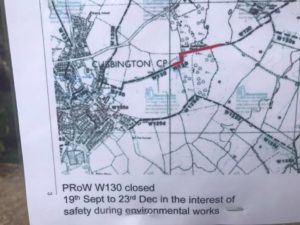 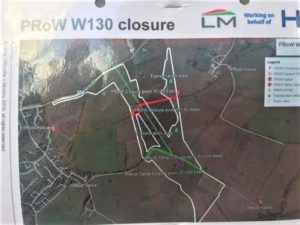 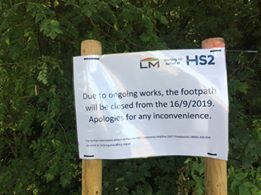 Similar HS2 contractor activity was reported all along Phase 1 of the line.

Groups opposed to HS2 and its destruction of the countryside took to their keyboards and smart phones and wrote, tweeted and emailed to anyone who could help, demanding a halt to works.  Representations to HS2 Ltd and Ministers were made by Jeremy Wright MP and others along the line.  Eight environmental charities joined together to publicise the fight.

On Monday 16th September the Government website published an announcement by Grant Shapps, Secretary of State for Transport, that ancient woodlands would not be felled “unless they are shown to be absolutely necessary to avoid major cost and schedule impacts, should the scheme proceed as planned.”  With translocation of the ancient woodland soil, which is time sensitive, planned in Cubbington Wood after tree-felling, it is hoped that HS2 Ltd will not attempt to use this proviso as a get-out clause.

Action Group member Rosemary Guiot said  “At last someone in Government is listening!  It would be nothing short of criminal to destroy habitats and features of the landscape which cannot be replaced while the future of HS2 is in doubt.  We know the reprieve may only be temporary.  A huge vote of thanks goes to everyone who helped by protesting, by spreading the word and by putting our case to the people who can change things.”