First of all may I wish you all a belated Happy New Year and offer my apologies for the long gap between updates. Yet again, it’s been a busy time.

We are expecting the publication of the so-called independent and much-leaked Oakervee review on HS2 and a decision on the future of the project some time this month. Rumours are rife: according to one it would be announced today, another says tomorrow and a third gives a date later in the month. You may recall that Doug Oakervee was head of HS2 Ltd for a while and the information leaked is that he thinks the project should go ahead. Lord Berkeley, Vice Chair of the review, disagrees with the review’s findings and has produced his own report. The cost, which we were assured back in summer, was £55 billion, then rose to £80+ billion, and is now estimated at being over £100 billion, which does not include trains or the infrastructure needed to give access (other than by car) to HS2 stations not connected to rail (i.e. most, if not all of them). National campaign Stop HS2 reports here http://stophs2.org/news/18973-berkeley-report-leaves-hs2-irrevocably-damaged

There have been further protests against the project, notably in the Colne Valley just outside London. A large number of protestors from all over the country gathered in January for a rather muddy walk through Denham Country park, led by Chris Packham. Chris is currently threatening legal action over the damage HS2 would cause to the environment.

Members of Warwickshire Wildlife Trust, the RSPB and other organisations will know that they have been campaigning for a Government rethink on HS2. Today they delivered a letter signed by over 70,000 people to Downing Street. If you were not aware of this and would like to add your opinion, you can still write to the Prime Minister at https://email.number10.gov.uk/ Please note that the form on this link only allows 1000 characters.

​Locally, the scene round South Cubbington Wood is one of devastation, with haul roads on three sides of the wood. You may have seen the large HS2 compound off Rugby Road, but what is not visible is the field behind the pear tree where archaeologists say they have found the remains of an Iron Age fort or settlement. Their excavations have been halted by a sea of mud for the moment. The Avon Way remains open at present, and there is access to the wood and Weston from this path. However, access to the wood via Mill Lane has been blocked and the footpath to the river diverted. It’s now (officially) impossible to reach the pear tree. A very recent piece of news is that, following complaints,contractors are making a path on the village side of the haul road where a permissive path used to join Mill Lane and the Avon Way, so a circular walk will be possible once more. 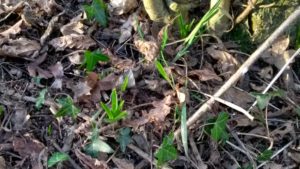 The protection campers are still in South Cubbington Wood and no further attempts have been made to evict them. The “Save Cubbington Woods” group are reinforced at times by other environmental activists from all around the country. They have made themselves quite at home, are treading lightly on the woodland and welcome any visitors prepared to brave the mud. I went up on Saturday and enjoyed a peaceful hour up there. It was good to hear of the support from local people who, mud permitting, bring up firewood and goodies for the campers and sometimes camp overnight as well. Due to the very mild winter, wood anemone, wood sorrel and bluebell foliage is already appearing in the woods and birds have already been seen carrying nesting materials. 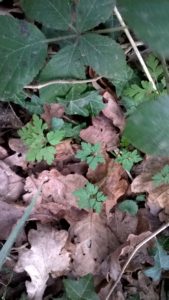 Sadly, a 1.5 mile stretch of hedgerow on Coventry Road has been ripped up in preparation for the realignment of the road and a bridge over the line. This rather took us all by surprise, especially the amount that was torn up. The same kind of work is expected to begin very shortly on Rugby Road. I shall be posting photos on our web page in the next day or so. https://www.hs2-cubbington.net/

A protection camp has also been set up on the Welsh Road between the Fosse Way and Southam to try to prevent similar destruction of a hedgerow and felling of oak trees. Sadly, all they have managed to do is to delay work several times. Although contractors are supposed to spare any old trees until a decision on HS2 is announced, they have felled several large oak trees along there. There is also a compound just past the canal bridge which dwarfs the Cubbington one. The damage to the countryside there and along the Ridgeway is dreadful to see. Hedgerow removal has also been taking place near the Dallas Burston polo ground and along the Ridgeway at Ufton today.

MP Jeremy Wright visited the Offchurch and Welsh Road sites briefly last Friday and was greeted by a good number of people protesting about the destruction of the environment. He repeated his opinion that this was the wrong way of doing High Speed rail, notably the wrong route, and that he and other MPs are still making their, and our, feelings known in Westminster. Mr Wright has set up an HS2 Implementation Forum for his constituency to bring local and HS2 Ltd representatives together to try to improve communications and sort out problems. HS2 Ltd’s communications skills continue to leave much to be desired.

Decision time for HS2 is not far away. The PM told a schoolboy that the Government was in a big hole over HS2, but that in such cases you have to keep digging … which is the opposite of the usual accepted wisdom. Stop HS2 suggested he might be heading for Australia. We await his decision.