What impacts will the HS2 route have on our area (Stoneleigh to Offchurch)?

The HS2 trackway would cross the grounds of the old Royal Showground, which is now called Stoneleigh Park Exhibition and Conference Centre, just clipping the corner of the Grade II* listed Stoneleigh Abbey Park. Through StoneleighPark and past Stareton the track would be in a cutting with a depth of between 6m and 9m.

The trackway would exit StoneleighPark about 100m north of the Main Gate, taking land from the properties there and causing high levels of noise pollution to any that escape demolition. According to predictions by HS2 Ltd, noise pollution over much of the area of the Stoneleigh Park Exhibition and Conference Centre would be high enough to cause annoyance, with increased severity on the eastern side. The setting of the Grade II* listed Stare Bridge would be largely destroyed. Extensive realignment work would be required to the B4113 and the minor road to Stareton at this point and a road bridge would have to be constructed to take the B4113 over the trackway, also requiring the road height to be raised; this work would largely destroy the small wood known as Hares Parlour. A drainage pond, 100m by 45m, would be excavated in a field east of the main entrance to the Stoneleigh Park Exhibition and Conference Centre. 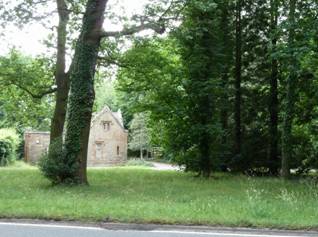 The route would continue past Stareton, through a small spinney and across farmland towards the B4453 Leicester Lane. All of this stretch would be in cutting up to 10m deep, though becoming much shallower as it approaches Leicester   Lane. In order to provide shielding for the railway in this area “false cutting” earthworks, 1.4km long and up to 400m wide, are proposed. These earthworks would significantly change the landscape around Leicester Lane.

Where the trackway would cross Leicester Lane it would be approximately at ground level, requiring the road to be realigned and raised on embankment to cross the track by bridge. Despite the shielding earthworks, train noise pollution predicted to be at a level high enough to cause annoyance would affect the properties on this section of Leicester Lane and nearby Stonehouse Farm, and this would be added to by traffic noise from the elevated road.

Three drainage ponds would be excavated along this affected stretch of Leicester Lane. 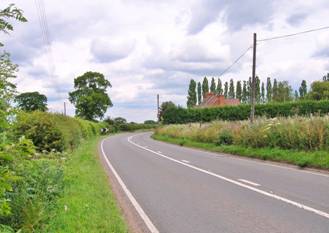 Coventry Road (A445 to Cubbington)

Between the Leicester Lane and Coventry Road crossings, the trackway would enter a cutting, running for approximately 1.9km and reaching up to 12m deep. Design changes made by HS2 Ltd since the 2011 consultation have reduced the planned depth of this cutting by up to 9m, so reducing the shielding that this feature would provide.

The point where the track would go under Leicester Lane is about 550m from the buildings of Furzen Hill Farm and the closest the track would run to the farm buildings is about 400m These buildings are shown as just outside the edge of the area where noise levels are predicted to cause annoyance.

Whilst HS2 is being built, a construction compound will be located on Coventry Road, midway between Furzen Hill Farm and Oakdene Nursey. Traffic to and from this compound will be routed to and from Leicester Lane past many houses in Cubbington (via Rugby Road and Kenilworth Road).

The footpath that runs from Rugby Road to the northwestern tip of North Cubbington Wood would be rerouted along Rugby Road and up the western edge of the wood. 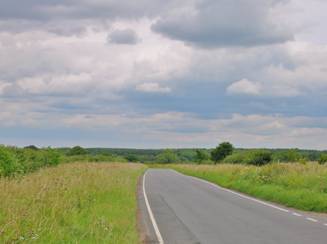 Coventry Road looking towards A445

The predicted area of noise annoyance extends almost to the Oakdene Nursery on the Coventry Road and the four houses on Rugby Road that are within Cubbington Woods. It is also likely that the construction of HS2 would cause high levels of annoyance to the occupiers of these properties.

Rugby Road would be realigned to allow a bridge over the railway to be built. To provide sufficient clearance for this track crossing the new stretch of road would be raised on embankments. 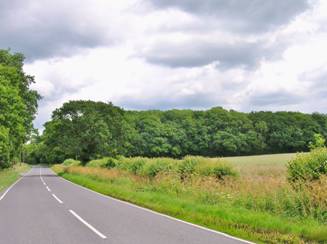 Just after Rugby Road, the cutting would be required to pass through the southern part of South Cubbington Wood, which is defined as “ancient woodland”. As a gesture to the sensitivity of this environment the width of the cutting in this area would be minimised by incorporating vertical retaining walls. The excavation of a cutting, even the reduced-width cutting that is now proposed, is bound to have a devastating effect on this precious natural feature; HS2 Ltd admits that 2ha of woodland will be lost, but it could easily be more than this. This excavation would also destroy the champion wild pear tree, which lies near the edge of the wood. Previous plans to transplant this tree have now been dropped by HS2 Ltd on the grounds that this would not be cost efficient.

During construction it would be necessary to either close or substantially reroute the Shakespeare’s Avon Way and Mill Lane footpaths. Both of these paths would eventually be reinstated with footbridges spanning the trackway. 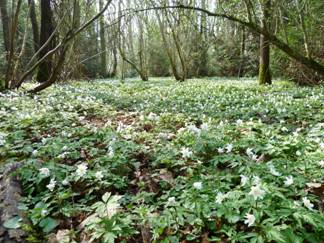 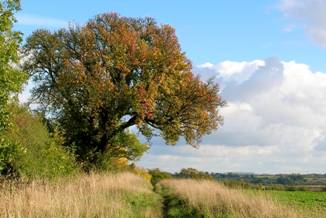 The trackway would emerge from the cutting in farmland to south-east of South Cubbington Wood and would cross the unblemished valley of the River Leam, causing a scar on the beautiful vistas of this valley that can be obtained from the footpaths that cross the farmland. The crossing of the valley would require the construction of an embankment, rising up to a height of 11m at the point where a 185m long viaduct will span the river.

HS2 Ltd has ignored requests from our action group to minimise the planned height of the trackway across the valley – the proposed viaduct is about twice at high as it needs to be to clear the River Leam in flood – and is proposing more earthwork “false cuttings” instead. Whilst these earthworks are designed to shield the trackway, they would be a significant intrusion into the landscape of the valley in their own right and do not appear to be particularly efficient in shielding noise; the noise footprint predicted by HS2 Ltd is approximately 1.5km wide at the point where the trackway would cross the River Leam.

A drainage pond, 110m by 70m, would be excavated on the Cubbington side of the River Leam, with a slightly smaller one on the Offchurch side.

It is likely that construction activities would impact badly on the buildings of Lower Grange Farm and the HS2 Ltd noise prediction shows these buildings as above the threshold for annoyance. 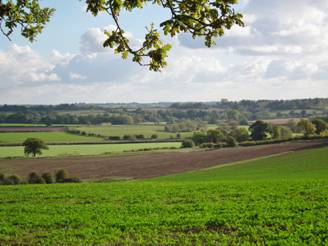 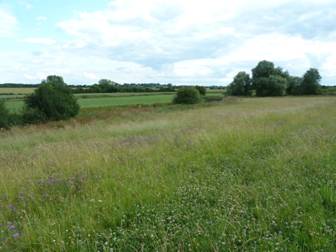 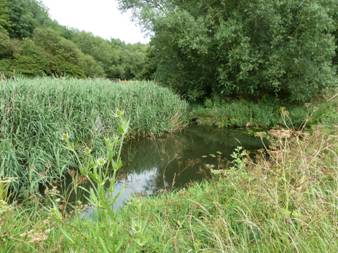 River Leam near the crossing point

It is hoped that the cutting will protect the main body of the village of Cubbington from excessive noise from HS2, and all points in the village are outside the threshold for annoyance shown on the HS2 Ltd noise prediction. Some sample distances from the centre-line of the cutting are: 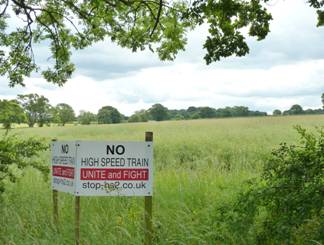 Offchurch: route towards Southam and the south