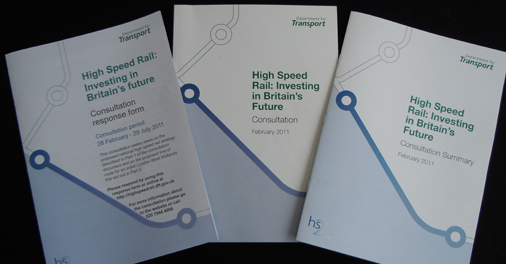 The public consultation on High Speed Two ran from 28th February 2011 until 29th July 2011. It was one of the biggest consultations ever undertaken by in the UK, and covered the Government’s proposed strategy for a high speed rail network linking London, West Midlands and the North. It provided the opportunity for individuals, as well as local and national organisations, to comment to Government on the proposals

In order to inform the consultation the Department for Transport and HS2 Ltd jointly published High Speed Rail: Investing in Britain’s Future .

The Consultation document posed seven questions to be considered.

An independent response analysis agency, Dialogue by Design, has been appointed to handle the receipt, recording, analysis and reporting of consultation responses. The report it produces will be considered by the Secretary of State and “will inform his decisions later in the year”. We expect a further announcement on the future of the HS2 proposal towards the end of 2011.

There are also other documents that have been published to inform the public consultation.

Some organisations have published their consultation responses on the Internet and we expect more to follow in the coming weeks. A selection of those currently available, which are of local and general interest, is listed below: